With an area of nearly 3,07,000 square kilometres, Maharashtra is the third largest state in India, after Rajasthan (largest) and Madhya Pradesh (second largest). The state sources its name from the word ‘Maha Kantara’ (Dandakaranya), which roughly translates to ‘The Great Forest’; however, there are other etymological theories which state that the name ‘Maharashtra’ has been derived from the ancient Prakrit form known as ‘Maharashtri’. Maharashtra is bordered on all sides by five other Indian states – Chhattisgarh in the east, Karnataka in the south, Gujarat in the north west, Madhya Pradesh in the north and Andhra Pradesh in the south east. The entire western coast of the state is formed by the Arabia Sea. 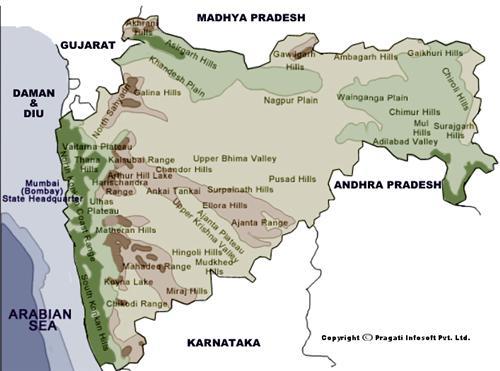 One of the most remarkable features underlying the geography of Maharashtra is its physical homogeneity, underscored by its plateau character. A number of rivers flow through this plateau land and by their criss-crossing action, have divided it into several river valleys and high altitude interfluves. A couple of these are Buldana and Ahmednagar.

Inspite of having a predominant plateau character, Maharshtra’s physical framework is constituted by the Sahyadri Range which, with an average altitude not exceeding 1000 metres, descends steeply along the west to meet the Konkan coast bordering the Arabian Sea and forms the transitional Malwa zone before sloping down to the plateau level on the east.

The natural boundaries for the state in the north and the east are formed by the Satpura Range and the Bhamragad – Chiroli – Gaikhuri Ranges.

Much like the rest of the country, Maharashtra is home to the tropical monsoon climate for most parts of the year. Summers are usually hot and scorching, but followed by the soothing rains of the monsoon season – and, as most of us are well aware of, Maharashtra enjoys the best forms of monsoon in the whole of India. The western sea clouds are responsible for the bulk of rains received by the state during the monsoons; the Konkan Coast, being fully exposed to the rain laden winds receives the heaviest bouts of rainfall in Maharashtra, followed by the Sahyadri Range which receives nearly 400cm of rainfall on an average. In the western plateau zones, which lie mainly to the east of the Sahyadri, the rainfall is found to diminish drastically to less than 100cm, forming a small dry zone around the Solapur – Ahmednagar area.

Even though mythological tales associated with the Dandakaranya mention the presence of thickly vegetated forests in the whole of Maharashtra, much of that famous forest cover has been removed to facilitate human settlements and industrial activities. At present, only 17% of the state is covered with forests, much of which is in the Sahyadri Range, while most of the area in the plateau is covered by open scrubs.

A number of ecologically sensitive zones exist in Maharashtra, most of which have been declared as ‘protected’ by either the State or Central government. Some of the most famous protected areas in the state are –

Considered to be one of the picturesque states of India, Maharashtra has been at the vanguard of the Indian tourism industry for quite some time. With beautiful natural and geographical features like lakes, rivers, waterfalls and canyons in plenty, the state indeed presents tourists with some of the most exemplary natural sights that exist in this world. Here, in this article, we shall take a look at some of the most visited lakes that have made their way through Maharashtra. 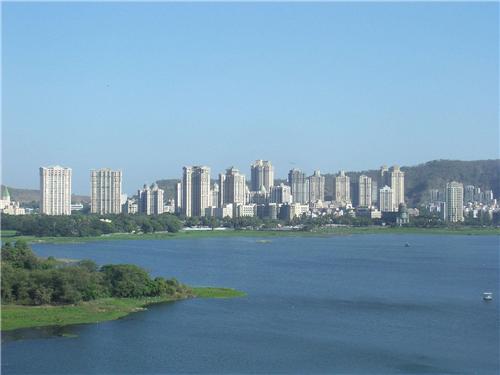 Even though this is an artificial lake, Powai in Mumbai has been one of the prime tourist attractions in the city for a long time. The lake was eponymous named after the Framaji Kavasji Powai Estate, and also has the city suburb where it is located bearing the same name. The lake has a catchment area of nearly 7 km and its depth ranges between 3 and 12 km, along its course.

The popularity of the lake has apparently been increased, over the years, by the presence of two of the most well known technical educational institutes of the country – Indian Institute of Technology, Bombay and National Institute of Industrial Engineering (NITIE). The ever increasing inflow of tourists and the congenial environment around the lake provided a massive boost to the creation of new settlements in the vicinity.

Hotels and residential complexes have come up, in the neighborhood of the lake, in plenty in the recent times. One of the major issues surrounding the beautiful Powai Lake, however, has been the steady deterioration in the quality of the water mainly due to increased levels of contaminants. Prospective tourists might like to remember that the nearest railway station to the lake is Kanjurmarg. 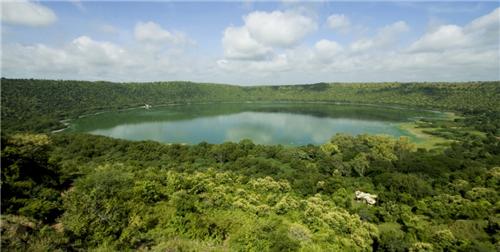 This was one of the many saline lakes that were born out of the meteor impacts during the Pleistocene Epoch phase of the history of Earth’s evolution, which is estimated to have elapsed approximately 60,000 years ago. Alkalinity and salinity are both present in the lake, which presents one of the finest examples of the crater-lake ecosystem in India. As a result of the number of unique features which the Lonar Lake combines within itself, various archaeological and geological organizations have conducted studies on it, in the past. Some of these well known organizations include the Smithsonian Institute, Geological Society of India, and the United States Geological Survey. The studies conducted here have resulted in subdividing the geographical features of the lake into five zones, namely
The flora and fauna present in the lake ecosystem have drawn throngs of tourists to this location, at different times during the year. The presence of biological nitrogen fixation in the Lonar Lake was discovered after a number of scientific studies and tests, in 2007.

Pashan Lake in Pune is one of the most important water bodies located in the vicinity of the city. It is an artificial lake that was created in the early 90s, to serve as the primary source of water for the Pashan village and the Governor’s residence. The catchment area of the lake has an extent of nearly 40 square kilometers, with the main water inlet being the Ram Nadi – a rivulet. The lake is especially well known for the various kinds of migratory birds who make their way to the waters, at various times during the year. Tourists, who are fond of bird-watching, thus find this place extremely suited to their interests. To facilitate tourist movement around the lake, Nature Trail - a 300-metre footpath - has been constructed by the Pune Municipal Corporation.

Located near Gawand Baug in Shivaji Nagar in Thane, Upavan Lake is famous for hosting the annual Upavan Arts Festival and the presence of a temple dedicated to Lord Ganesha, in its vicinity. The major credit for the construction of the lake goes to J.K.Singhania, with the objective of securing a source of steady water supply for the Raymond factory. The Yeoor Hills, in the backdrop, have made the surrounding landscape utterly fascinating for tourists; besides, the lake is presently one of the most well known recreational spots in the city of Thane in Maharashtra. Locals often refer to this spot as the ‘Lover's Paradise’ for Thane!


Talk of Indian states abounding in scenic beauty and the one name that spontaneously comes to mind is Maharashtra – home to some of the most exotic natural beauties, the state is a paradise for nature loving tourists. The surrounding hill stations like Mahabaleshwar and Lonavla add to the tourism industry that is a major driver of the economy of Maharashtra. In this article, we shall take a glimpse into the many beautiful waterfalls that can be seen in the various corners of this western state.

Located at a height of more than 650 feet, Kuna Falls is one of the most popularly visited waterfalls in the state of Maharashtra, primarily because it is situated right at the heart of the twin hill cities of Lonavla and Khandala – both of which are found teeming with tourists all throughout the year. Those visiting the twin hill stations inevitably visit the Kuna Falls, during the course of their routine sightseeing activities. The waterfall is visible from the old Pune-Mumbai Highway and it generally attracts the maximum population of tourists during the monsoons. 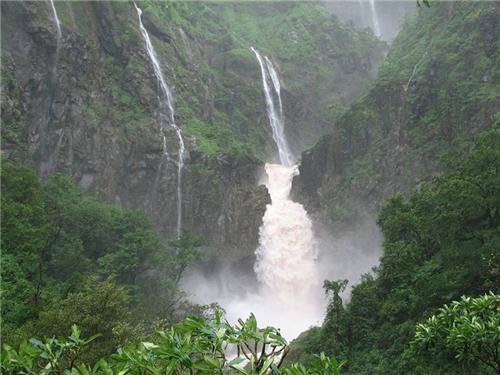 Flowing into the waters of the River Koyna that makes its way through Maharashtra, Dhobi Falls in Mahabaleshwar is located at a height of more than 450 feet. It is one of the most easily accessible waterfalls in the state, with the famous Elphinstone Point serving as a platform for tourists who wish to make full use of their opportunity to feel the heavenly appeal of this place. The monsoon season is when the highest number of tourist footfalls is found in this spot – usually, the months of July, August, September and October constitute the most appropriate time of the year for visiting Dhobi Falls.

This is one of the highest waterfalls in the country, located at a height of more than 1100 feet, and well known for the numerous adventure sports facilities it presents to the tourists. Besides, it is located amid a number of hills and hillocks and is thus one of the greenest waterfalls in Maharashtra. The waterfall is nearly 20 kilometres away from the district of Satara, and can be reached via the Pune-Bangalore Highway or the Satara Railway Station. Even though the waterfall is more than 100 kilometres away from Pune, tourists visiting the city are often found making their way to the Thoseghar Falls. The Chalkevadi Valley, located in the vicinity of the waterfall, offers the ideal viewing point to tourists.

With the Konkan Coast and the Western Ghats flanking it, Amboli Falls in the Sindhudurg district of Maharashtra is considered to be one of the most ecologically important waterfalls in the country. This has become an important tourist destination in the western part of the country, because of the Amboli hill station near which it is located. The months of August to December are usually considered the best time to visit this place. The maximum height attained by this waterfall is nearly 400 feet.

One of the most popular waterfalls in the vicinity of the picturesque hill station of Mahabaleshwar, Lingamala has a maximum height of nearly 600 feet and sources its water from the nearby Venna Valley. Venna Valley and Venna Lake, therein, are major spots of tourist interest themselves, and this has significantly popularized Lingmala to tourists visiting the nearby areas. People who crave to see a rainbow blossoming in the monsoon sky must not miss out on any opportunity to visit this place – rainbows can be seen here in plenty during the months of July, August and September, which are also the best months to visit this waterfall.

Located in the village of Khaman, on the Mumbai-Ahmedabad Highway, in the district of Thane in Maharashtra, Chinchoti Falls is famous for the trekking opportunities which it presents to the tourists. This spot witnesses heavy concentration of tourists who are interested in trekking amid exotic greenery of the surrounding hills. The trekkers make their way through the Thungareshwar Forests, which in itself is a rich repository of flora and fauna. Tourists can make their way to the Chinchoti Falls either from the Vasai Railway Station or the Kaman Phata bus stand.